Townhall to Support the Arts

Join MPP Suze Morrison and an expert panel for a conversation about the impact of COVID-19 on arts and culture workers. She will be joined by local experts Dr. Jill Andrew, Ali Momen, Brian Chang, Justin Antheunis, and Vikki Velenosi for an engaging conversation about what workers need now to get through the pandemic, why we should invest in the arts as part of our economic recovery, and how supporting arts and culture workers will benefit all Ontarians. 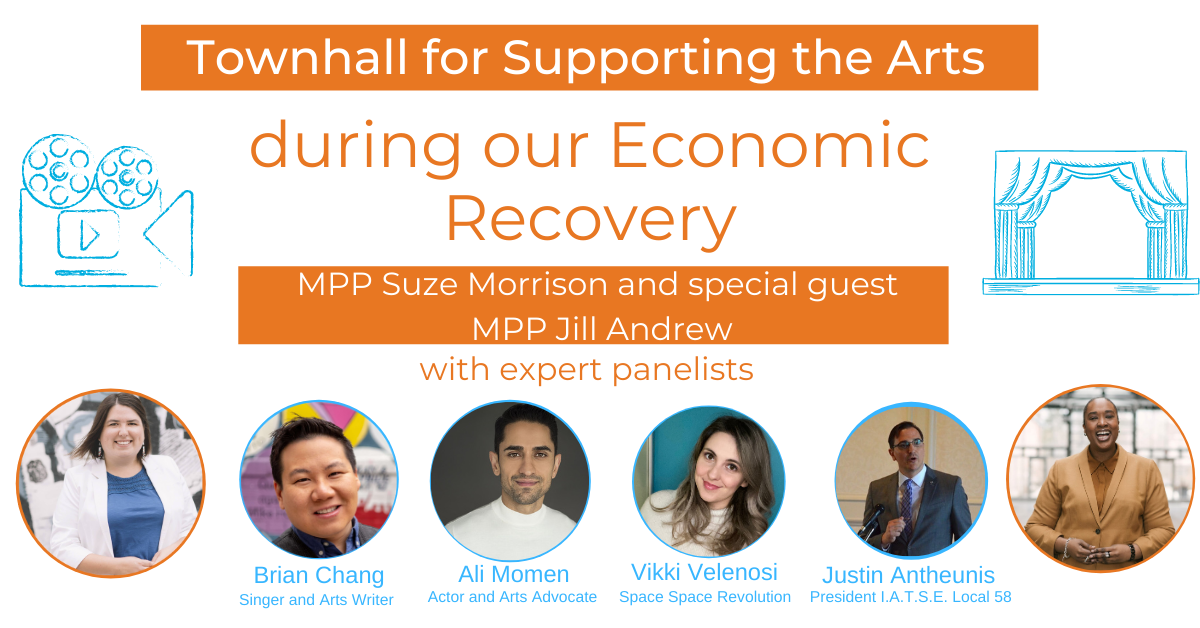 Dr. Jill Andrew is the MPP for Toronto-St. Paul’s and a fierce advocate for the arts and women's issues. Jill is the first Black and Queer person to be elected to the Ontario Legislature and she is a community co-owner of Glad Day Bookshop – the world’s oldest LGBTQ bookstore!

Ali Momen is an accomplished and award winning actor who has graced many of the largest stages in North America and has starred in independent, major films and many popular television shows. He was last on stage in the smash hit musical COME FROM AWAY. On camera Ali played the lead role in Deepa Mehta’s BEEBA BOYS, and can be seen as Kamran Gant in STAR TREK : DISCOVERY. Ali is an educator who teaches at Sheridan Institute and George Brown. You can catch Ali every week on his podcast SOFT REVOLUTION where he and Torquil Campbell, along with some of the biggest artists and artistic thinkers, try to bring art into politics, and politics into art.

As a labour organizer Brian has fought for workers at PSAC, OPSEU, and am now at SEIU Healthcare. As an artist, Brian has sung with the Toronto Mendelssohn Choir, bringing music to thousands. As an activist, Brian has taught community organizing at Ryerson University at the Chang School. Brian Chang is a proud resident of Toronto Centre where he lives with his partner Jeff.

Vikki Velenosi is an Artist Entrepreneur from Toronto. She is the owner and CEO of Space Space Revolution, providing affordable co-working studio and performance space for Toronto’s indie arts community. During the Pandemic, Space Space Revolution’s largest location was forced to close its doors, effectively downsizing the company to 1/3 of its original capacity. Since that time, Vikki has been advocating for funding and support for independent arts facilities who typically slip through the cracks of government funding at the best of times.

Justin Antheunis is the president of the International Alliance of Theatrical Stage Employees (I.A.T.S.E.) Local 58, representing more than 500 stagecraft professionals working in Toronto’s live entertainment sector. A veteran stagehand with more than 20 years of experience, his previous positions include posts as the Head Electrician at the Toronto Centre for the Arts and Assistant Head Electrician at the Four Seasons Centre.